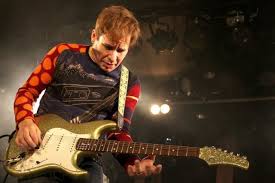 Chris Duarte (born February 16, 1963) is an American guitarist, singer, and songwriter. Duarte plays a style of Texas blues-rock that draws on elements of jazz, blues, and rock and roll. Duarte was born in San Antonio, Texas, and was first inspired by music at age 8 after seeing Fiddler On The Roof on television. Duarte first began playing on his brother’s guitar and then obtained his own electric guitar at the age of 14. In 1979, Duarte moved to Austin, Texas, and purchased a 1963 Fender Stratocaster guitar for $500 and began exploring various genres including the jazz music of John Coltrane and Miles Davis. See for more.