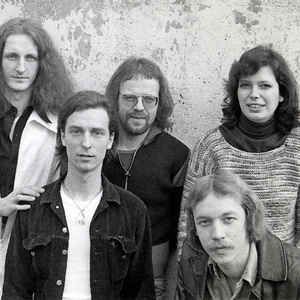 STREETMARK was founded 1968 in Düsseldorf, when Dorothea Raukes, who had studied Classical Music and played keyboards, met the Brothers Thomas and Bernd Schreiber, both guitarists. Dorothea and Thomas formed the nucleus of the band. In the beginning STREETMARK played mainly covers of the BEATLES, Jon Mayall and DEEP PURPLE. In 1969 they refused a proposal for a record deal. In the following five years STREETMARK developed their own style mainly based on the compositions of Dorothea and Thomas, influenced by PROCOL HARUM, FOCUS and ELP. Finally in 1975 STREETMARK recorded their debut record “Nordland” for Sky. The record was produced and recorded by Connie Plank with the following line up : Dorothea Raukes (keyboards), Thomas Schreiber (guitar), Hans Schweiss (drums), Georg Buschmann (vocals), Wolfgang Westphal (bass). Bernd Schreiber did the mixing and Soundboard duties. See for more.