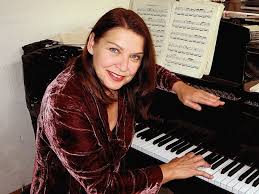 Inga Rumpf (born August 2, 1946 in Hamburg ) is a German singer and composer. Rumpf was born as the daughter of a Hamburg sailor and an East Prussian seamstress in Hamburg’s St. Georg district. In the early 1960s, she made her first appearances with various blues bands in the youth home of St. Pauli . In 1965 she became the singer of the folk-rock group Die City Preachers , in which Udo Lindenberg played drums at times. In 1968 she took part as a solo interpreter with the title Schade for the tears at the first German Schlager competition . In 1970, The City Preachers renamed itself Frumpy , with Carsten Bohn(Drums), Jean-Jacques Kravetz (keyboards), Karl-Heinz Schott (bass), and the first record All Will Be Changed was written. See for more.

My Life Is A Boogie (live)

How The Gipsy Was Born

Love Is No Gamble – live

Back to the homepage .