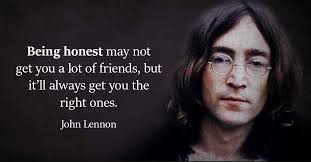 John Winston Ono Lennon[nb 1] MBE (born John Winston Lennon, 9 October 1940 – 8 December 1980) was an English singer, songwriter and peace activist who gained worldwide fame as the founder, co-lead vocalist, and rhythm guitarist of the Beatles. His songwriting partnership with Paul McCartney remains the most successful in history. In 1969, he started the Plastic Ono Band with his second wife, Yoko Ono. After the Beatles disbanded in 1970, Lennon continued as a solo artist. Born in Liverpool, Lennon became involved in the skiffle craze as a teenager. In 1957, he formed his first band, the Quarrymen, which evolved into the Beatles in 1960. See for more.

Woman is the “N” of the World

Give peace a chance

Happy Xmas (War Is Over

Bsck to the homepage