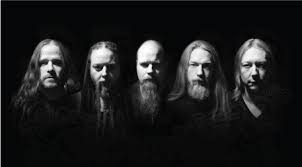 Saturnus are a band from Denmark formed in 1991. They play melodic death/doom metal with synthesized touches of gothic metal. Saturnus released their third full-length album, Veronika Decides to Die, in May 2006. The album title was inspired by Paulo Coelho’s novel of the same name. Prior to 2006, Saturnus had released two other albums, Paradise Belongs To You and Martyre, in addition to an EP, For The Loveless Lonely Nights. See for more.

Call Of The Raven Moon

Softly On The Path You Fade