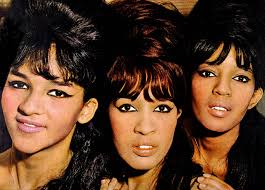 The Ronettes (/ˌrɒˈnɛts/) were an American girl group from New York City. One of the most popular groups of the 1960s, they placed nine songs on the Billboard Hot 100, five of which became Top 40 hits. The trio from Spanish Harlem, New York, consisted of lead singer Veronica Bennett (later known as Ronnie Spector), her older sister Estelle Bennett, and their cousin Nedra Talley. Among the Ronettes’ most famous songs are “Be My Baby”, “Baby, I Love You”, “(The Best Part of) Breakin’ Up”, and “Walking in the Rain”, all of which charted on the Billboard Hot 100. See for more.

Sing Be My Baby

Baby, I Love You

When I Saw You

Baby, I Love You

Walking In The Rain