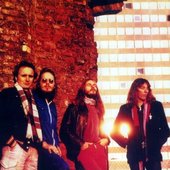 Mon Dyh was a blues rock band from West Berlin . Developed in the environment of the rock-against-right movement in 1978, Mon Dyh played straight-line blues rock in English against the prevailing music of the Neue Deutsche Welle . The band gave their concerts mainly in clubs, youth centers, at non-commercial or self-organized festivals. In 1980 the album Murderer, produced and published on his own initiative, was released . The LP sold successfully despite a lack of ties to an established label, so that a year later, Mon Dyh – again on her own initiative – launched her second album entitled Confused Mind . The third and last LP on Am Galgenwas released in 1983 by the small label Woolfe Records. See for more.

Blues Between The Birth – live

Who’ll Be The Next

dont you break my heart