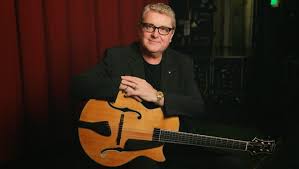 Martin Taylor, MBE (born 20 October 1956) is a British jazz guitarist who has performed in groups, guitar ensembles, and as an accompanist. Taylor was born in Harlow, Essex, into a family with a musical heritage and a Gypsy tradition. At the age of four, he received his first guitar from his father, jazz bassist William ‘Buck’ Taylor who only took up music at 30. Buck frequently played the music of the Quintette du Hot Club de France, so the young Martin Taylor became inspired by guitarist Django Reinhardt. At age eight, he was already playing in his father’s band and at 15 he quit school to become a professional musician. The band Martin joined at 15 called the Oo-yah Band was led by Lennie Hastings, a jazz drummer who spent many years with the Alex Welsh band. The band included Nick Stevenson (trumpet), Peter Skivington (bass guitar), Ron Brown (trombone), and Jamie Evans (piano), George Chisholm (trombone) and Beryl Bryden (washboard and vocals). See for more.