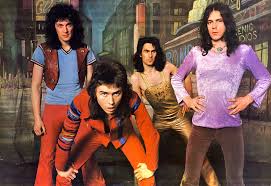 Golden Earring is a Dutch rock band, founded in 1961 in The Hague as the Golden Earrings (the ‘s’ was dropped in 1969). They achieved worldwide fame with their international hit songs “Radar Love” in 1973, “Twilight Zone” aka When the Bullet Hits the Bone in 1982, and “When the Lady Smiles” in 1984. During their career they had nearly 30 top-ten singles on the Dutch charts; over the years they produced 25 studio albums. Current members of Golden Earring are Barry Hay (vocals, guitar, flute and saxophone, member since 1967), George Kooymans (vocals and guitar, founder of band), Rinus Gerritsen (bass and keyboard, founding member), and Cesar Zuiderwijk (drums and percussion, member since 1970). See for more.

just a little bit of peace in my heart

When The Lady smiles

The Devil Made Me Do It

Going To The Run

Sound Of The Screaming Day