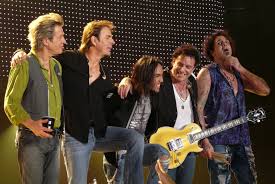 Journey is an American rock band formed in San Francisco in 1973 by former members of Santana and Frumious Bandersnatch. The band has gone through several phases; its strongest commercial success occurred between 1978 and 1987, after which it temporarily disbanded. During that period, the band released a series of hit songs, including 1981’s “Don’t Stop Believin'”, which in 2009 became the top-selling catalog track in iTunes history. Its parent studio album, Escape, the band’s eighth and most successful, reached No. 1 on the Billboard 200 and yielded another of their most popular singles, “Open Arms”.  See for more.

Any Way You Want It

Wheel In The Sky

Send Her My Love

When You Love A Woman