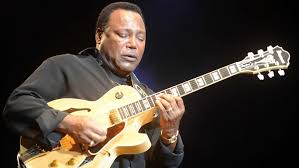 George Washington Benson (born March 22, 1943) is an American guitarist and singer. He began his professional career at the age of 19 as a jazz guitarist. A former child prodigy, Benson first came to prominence in the 1960s, playing soul jazz with Jack McDuff and others. He then launched a successful solo career, alternating between jazz, pop, R&B singing, and scat singing. His album Breezin’ was certified triple-platinum, hitting no. 1 on the Billboard album chart in 1976. His concerts were well attended through the 1980s, and he still has a large following. Benson has been honored with a star on the Hollywood Walk of Fame. Benson was born and raised in the Hill District of Pittsburgh, Pennsylvania At the age of seven, he first played the ukulele in a corner drug store, for which he was paid a few dollars. At the age of eight, he played guitar in an unlicensed nightclub on Friday and Saturday nights, but the police soon closed the club down. See for more.

You Are The Love Of My Life

Never Give Up On A Good Thing

Kisses in the Moonlight

Give Me The Night

Nothing’s gonna change my love for you