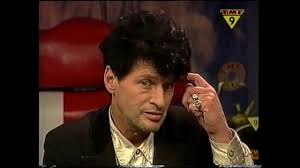 Hermanus “Herman” Brood (Dutch pronunciation: [ɦɛrˈmaːnɵs ˈɦɛrmɑn ˈbroːt]; 5 November 1946 – 11 July 2001) was a Dutch musician, painter, actor and poet. As a musician he achieved artistic and commercial success in the 1970s and 1980s, and was called “the greatest and only Dutch rock ‘n’ roll star”. Later in life he started a successful career as a painter. Known for his hedonistic lifestyle of “sex, drugs and rock ‘n’ roll”, Brood was an enfant terrible and a cultural figure whose suicide by jumping from a hotel roof, apparently influenced by a failure to kick his drug and alcohol habit, strengthened his controversial status; according to a poll organised to celebrate fifty years of Dutch popular music, it was the most significant event in its history. See for more.

I can’t stand the Rain

I don’t need you