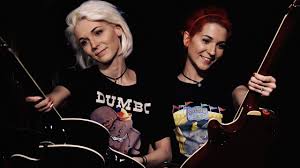 The MonaLisa Twins are a pop rock band, fronted by twin sisters and singer-songwriters Mona (rhythm guitar, percussion, harmonica, flute) and Lisa Wagner (lead guitar, ukulele, cello). They are originally from Austria (born in Vienna, on June 16, 1994) and are currently based in the Liverpool area, in the United Kingdom. Known for their YouTube video covers of songs by The Beatles and other 1960s bands, many of which have been issued on a series of albums, they also have released two albums of original songs. They have toured with Steve Harley & Cockney Rebel, performed at the Glastonbury Festival, collaborated with American musician John Sebastian, and held a two-year residency at the Cavern Club. See for more.

Till There Was You

Here, There And Everywhere

I Saw Her Standing There