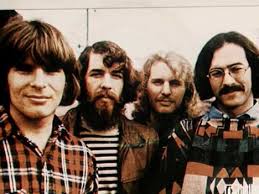 Creedence Clearwater Revival (sometimes shortened to Creedence or CCR) was an American rock band that gained popularity in the late 1960s and early 1970s. The band consisted of lead vocalist, lead guitarist, and primary songwriter John Fogerty, his brother and rhythm guitarist Tom Fogerty, bassist Stu Cook, and drummer Doug Clifford. Their musical style encompassed the roots rock and swamp rock genres. Despite their San Francisco Bay Area origins, they portrayed themselves as Southern rock stylists, singing about bayous, the Mississippi River, catfish, and other popular elements of Southern iconography. See for more.

Born On The Bayou

I Put a Spell on You

I heard it through the grapevine

Have You Ever Seen The Rain

Up Around the Bend

Run Through the Jungle

Looking Out My Back Door