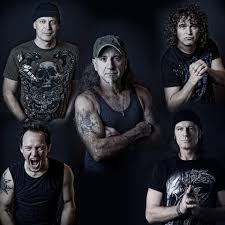 Accept is a German heavy metal band from the town of Solingen, originally assembled by former vocalist Udo Dirkschneider, guitarist Wolf Hoffmann and bassist Peter Baltes. Their beginnings can be traced back to the late 1960s. The band played an important role in the development of speed and thrash metal being part of the German heavy metal scene, which emerged in the early to mid-1980s. Accept achieved commercial success with their fifth studio album Balls to the Wall (1983), which remains the band’s only album to be certified gold in the United States and Canada, and spawned their well-known hit “Balls to the Wall”. See for more.

Princess of the Dawn

Fast As a Shark