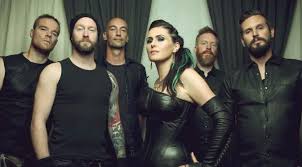 Within Temptation is a Dutch symphonic metal band and one of the most successful bands in the genre. The band started in the formation called The Circle. When Robert Westerholt and Jeroen van Veen left the band, The Circle continued under the name Voyage and recorded a debut album called Embrace but shortly afterwards Voyage fell apart. Robert Westerholt and Jeroen van Veen, however, continued under the name The Portal, together with Robert’s girlfriend, Sharon den Adel. Despite the fact that there was already a logo designed for The Portal, the name was changed to Within Temptation before the release of the first songs. See for more.

Shot in the dark

Are You the One?