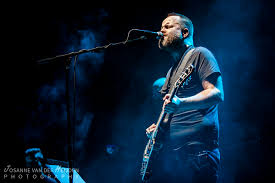 Bjørn Riis is one of the founding members, the lead guitarist, producer and main songwriter of the highly successful Norwegian band Airbag. The band’s five critically acclaimed albums has gained Airbag a strong following around the globe. Together with Airbag and as a solo artist, Bjørn has shared the stage with some of the biggest names in the prog genre, including Marillion, Yes, Saga, Anathema and Neil Morse and he’s played at several genre leading festivals such as Night of the Prog and Cruise to the Edge. On May 3 2019 Bjørn released his fourth album, A Storm is Coming on Norwegian prog label Karisma Records. Storm is the follow-up to the much praised and awarded previous releases Lullabies in a Car Crash (Karisma Records 2014), Forever Comes to an End (Karisma Records 2017) and Coming Home (Karisma Records 2018). Growing up in the 1980s Bjørn has his musical roots in classic rock and bands like Kiss, Black Sabbath, Whitesnake and Led Zeppelin. Later on, Pink Floyd, Porcupine Tree, Marillion and No-Man was crucial in the formative years of becoming a musician. See for more.

Where Are You Now

Forever Comes to an End