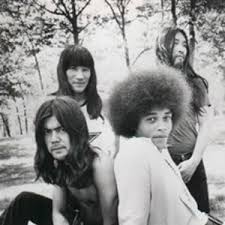 Flower Travellin’ Band (フラワー・トラベリン・バンド, Furawā Toraberin Bando) was a Japanese rock band that was formed in 1967. They were connected to Japan’s counterculture movement and noted for their mixture of early heavy metal with psychedelic and progressive rock. They received wide acclaim from critics but failed to achieve commercial success and separated in 1973 to pursue individual careers. The band reunited in late 2007, but permanently disbanded after the 2011 death of vocalist Joe Yamanaka. See for more.

Aw Give Me Air