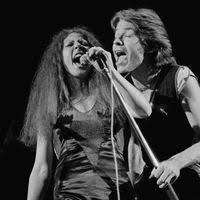 Vinegar Joe were a British R&B band. They issued three albums on Island Records, but were best known for their live shows and launching the solo careers of Elkie Brooks and Robert Palmer. Vinegar Joe evolved out of Dada, a 12-piece Stax-influenced, jazz-rock fusion band. Dada released one, eponymous, album in 1970, with a line up including vocalist Elkie Brooks and guitarist Pete Gage. Singer Robert Palmer, formerly with The Alan Bown Set, and bassist Steve York both joined Dada after the album had been recorded, and the four were signed by Ahmet Ertegun of Atlantic Records for USA and Chris Blackwell of Island Records for the UK and rest of the world to form Vinegar Joe  in 1971, adding keyboard player Dave Thompson. The band was  without a drummer. See for more.

Proud To Be A Honky Woman

See the World (Through My Eyes)

Take Me In Your Arms