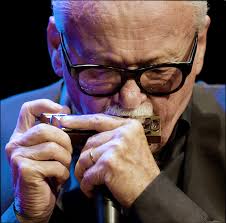 Jean-Baptiste Frédéric Isidor, Baron Thielemans (29 April 1922 – 22 August 2016), known professionally as Toots Thielemans, was a Belgian jazz musician. He was known for his harmonica playing, as well as his guitar, whistling skills, and composing. According to jazz historian Ted Gioia, his most important contribution was in “championing the humble harmonica”, which Thielemans made into a “legitimate voice in jazz”. He eventually became the “preeminent” jazz harmonica player. His first professional performances were with Benny Goodman’s band when they toured Europe in 1949 and 1950. He emigrated to the U.S. in 1951, becoming a citizen in 1957. From 1953 to 1959 he played with George Shearing, and then led his own groups on tours in the U.S. and Europe. See for more.

Shape Of My Heart