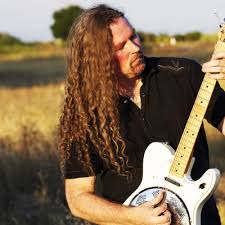 Michael Lee Firkins (born May 19, 1967) is an electric guitar player whose sound fuses bluegrass, country, blues, and jazz elements into his distorted rock sound. He is noted amongst guitarists for his prolific use of hybrid picking at high speeds. Firkins was born in 1967, in Omaha, Nebraska, to musician parents; his father was a lap steel guitarist and his mother a pianist. He started playing acoustic guitar at age eight. Though mostly self taught, he also took lessons at a local Omaha music store. Learning the songs of the times, Michael was heavily influenced by the guitar stylings of Lynyrd Skynyrd, Led Zeppelin, AC/DC, and Black Sabbath. See for more.

Space Crickets-Rain in the Tunnel

Jason Becker Not Dead Yet