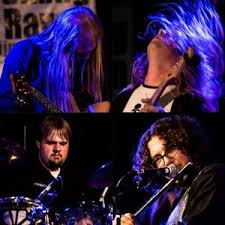 A Polish act The ADEKAEM were founded in January 2013 as a rock duo inspired by progressive rock or psychedelic rock from 70s until 80s by Andrzej BIELAS (keyboards) and Krzysztof WALA (guitars). They signed a contract with Lynx Music and released the debut album in October 2015, followed by the second opus entitled “Sound Coloring” in September 2017 also via Lynx Music. Basically they have been active as a duo by Andrzej and Krzysztof. Additionally Jakub BASOŃ has been responsible for lyrics … they released their third ‘double’ album “The Great Lie” in collaboration with musician mates like Tomasz HOLEWA (drums), Marcin STASZEK (vocals), Martyna ZYGADLO (vocals), Krzysztof WYRWA (bass), and Jakub BASOŃ (flute). See for more.

Woodland Frolics at 3 AM

The Fall of Phaeton