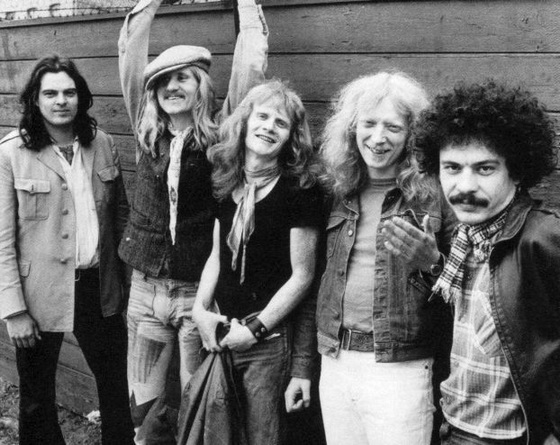 Founded in 1972 – Disbanded in 1977 – Regrouped in 2007 – Still active as of 2020. SECRET OYSTER became somewhat of a super group when members of BURNIN’RED IVANHOE, CORONARIAS DANS and HURDY GURDY formed this unit. By the end of BURNIN’ RED IVANHOE’s career (that spawned seven years), Karsten Vogel started forming a new band taking along with him BRI’s drummer Thrige and often jazz-partner bassist Vinding with him. Knowing from the Danish circuit guitarist Claus Bohling, he enticed him into the band that took its name from a track from BRI’s second album Secret Oysters Service. The last to join was keyboardist Knudsen, who had never played an electric instrument prior to entering this outfit, but was playing in a piano avant-garde trio. Knudsen would prove particularly helpful as the second songwriter of the group and allowing Vogel to leave the keyboards at will to play wind instruments. See for more.