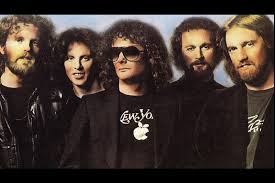 April Wine is a Canadian rock band formed in 1969 and based in Halifax, Nova Scotia. The band enjoyed international success in the 1970s and 1980s, releasing more than 20 albums since 1971. Although April Wine officially began in late 1969 in Waverley, Nova Scotia, their roots can be traced back to St. John’s Newfoundland in 1967/68. David and Ritchie Henman moved there when their father took a job at a local furrier company, Mitchell Furs. They would be heard jamming in a house on the corner of Bonaventure Avenue and Fleming Street in St. John’s before relocating to Nova Scotia. See for more.

bad side of the moon

I’m On Fire For You, Baby

You Won’t Dance With Me

Rock Myself To Sleep

Tonite Is A Wonderful Time To Fall In Love

Could Have Been A Lady

Just Between You And Me