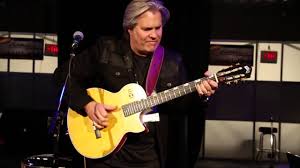 Doyle Dykes (born May 23, 1954) is an American country acoustic guitarist from Jacksonville, Florida. He is influenced by a wide variety of musical styles and musicians such as Chet Atkins, Jerry Reed, Duane Eddy, to the Beatles and. Cited along with guitarists such as Tommy Emmanuel as one of the best fingerstyle guitarists in the world, he is also known for his capability of playing proficiently with a wide range of different guitar tunings. Some of his best-known works and interpretations are “Wabash Cannonball”, “Country Fried Pickin'”, “U2 Medley”, “Be Still”, “Amazing Grace” and “While My Guitar Gently Weeps”. Dykes is a devout Christian and has served as a minister in a small church in Florida; the influence of Christianity is present in much of his work. He was a major endorser of Taylor Guitars and Rivera Sedona amplifiers, with his own signature models of each. In 2013 he began endorsing the Guild Guitar Company. Since 2015 he has touted his custom steel-fret Olson guitar as his “favorite guitar.” See for more.

Jazz in the Box

Nothing’s Too Good (For A Friend)

Howling of the Wood