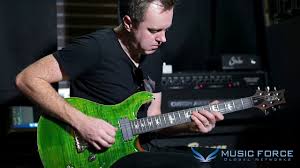 McBride started playing the guitar when he was ten. By age 15 he entered Guitarist Magazine’s Young Guitarist of The Year, a performance competition staged that year atWembley Conference Centre, which he won. Less than a year later, a few months after his sixteenth birthday, McBride was recruited by the Belfast-based metal band Sweet Savage, which reformed in 1994 without their founding guitarist, Vivian Campbell (Dio, Def Leppard), who McBride replaced. He toured with the band and recorded two albums, Killing Time 1996 and Rune 1998.  See for more.

So Much Love To Give

Down To The River

So Much Love To Give

Down To The Wire

The Power Of Soul Live