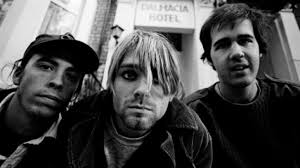 Nirvana was an American rock band formed by singer/guitarist Kurt Cobain and bassist Krist Novoselic in Aberdeen, Washington in 1987. Nirvana went through a succession of drummers, the longest-lasting being Dave Grohl, who joined the band in 1990. Despite releasing only three full-length studio albums in their seven-year career, Nirvana has come to be regarded as one of the most influential and important rock bands of the modern era. See for more.

Come As You Are

I Hate Myself & Want To Die