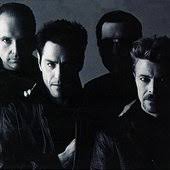 Tin Machine were a British-American hard rock supergroup formed in 1988, notable for being fronted by English singer-songwriter David Bowie. The band consisted of Bowie on lead vocals, sax, and guitar; Reeves Gabrels on guitar and vocals; Tony Fox Sales on bass and vocals; and Hunt Sales on drums and vocals. Tony and Hunt are the sons of American comedian Soupy Sales. Additional musicians who performed with the band on tour or in the studio, but were not members of the band itself included English guitarist Kevin Armstrong, who played on the band’s first studio album and first tour, and American guitarist Eric Schermerhorn who played on the second tour and live album Tin Machine Live: Oy Vey, Baby (1992). See for more.