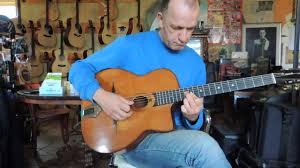 John Rijsdijk started playing guitar when he was nine years old on a guitar his father, who was a jazz musician, built for him. John was soon playing pieces by Vivaldi he learned by ear. His two elder brothers, who played the drums and bass guitar, noticed his talent and it didn’t take long for them to start a band together. They began by playing rock covers, but John soon started exploring the possibilities of writing his own music. See for more.