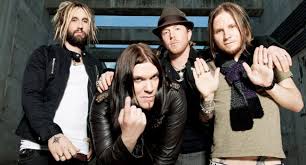 Shinedown is an American hard rock band from Jacksonville, Florida, formed in 2001 and founded by members Brent Smith (vocals), Brad Stewart (bass), Jasin Todd (guitar), and Barry Kerch (drums). A few lineup changes followed, and the band’s current lineup consists of Smith and Kerch, the band’s only two remaining original members, with guitarist Zach Myers, and bassist/pianist Eric Bass. Since Shinedown’s inception, they have released four albums: Leave a Whisper (2003), Us and Them (2005), The Sound of Madness (2008), and Amaryllis (2012), and a total of 17 singles. They have sold more than 6 million albums worldwide. See for more.