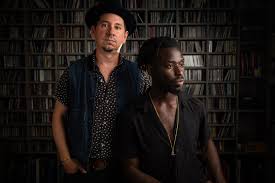 Black Pumas are a funk and soul duo based in Austin, Texas, United States, consisting of singer Eric Burton and guitarist/producer Adrian Quesada. Their work also has strong Latin music influences. The duo is a nominee for the Grammy Award for Best New Artist at the 62nd Annual Grammy Awards—its first-ever Grammy nomination. The duo formed in 2017 and released their debut album, Black Pumas, on June 21, 2019. They performed at South by Southwest in 2019 and won a best new band trophy at the 2019 Austin Music Awards. See for more.