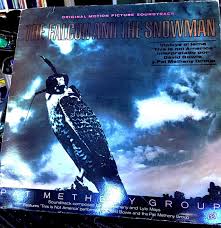 The Falcon and the Snowman is the soundtrack to the film of the same name and was composed and produced by Pat Metheny and Lyle Mays. It includes the song “This Is Not America”, a major hit sung by David Bowie. The music is performed by the Pat Metheny Group with occasional orchestra and choir. All songs written by Pat Metheny and Lyle Mays except “This Is Not America”, lyrics by David Bowie. See for more.

Psalm 121/Flight of the Falcon

This is not America

Extent Of The Lie