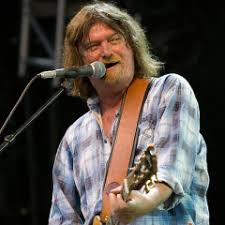 Johnny Madsen (born in Thyborøn, Denmark on 31 March 1951) is a Danish musician, songwriter and painter. In the period 1983 to 1992, he was part of Dalton, a supergroup trio made of Madsen, Lars Lilholt and Allan Olsen. Johnny Madsen is living on the island of Fanø, where he has his own art gallery “Madsens Malerier”. Johnny Madsen has been painting for many years, mostly inspired by expressionism and has mentioned Vincent van Gogh and Jens Søndergaard as inspirations. Madsen has exhibited in numerous galleries and at many events across Denmark and selected paintings are on permanent display at his art gallery on Fanø. See for more.