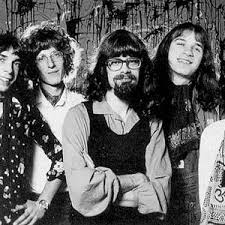 Another French obscurity from the 70’s by a band relatively unknown to the public. MEMORIANCE existed and recorded between mid-70’s and early-80’s,having two full-length albums and two singles on their backs.This French sextet came from Le Havre and released their debut in 1976. Their sound definitely belongs to the French symphonic rock school with plenty of sensitive guitars,atmospheric keys and generally the tracks follow a slow tempo.The opener ”Je ne san plus” offers hypnotic pianos,intense French vocals,guitars in the style of STEVE HACKETT and JAN AKKERMAN and even moments with a slightly jazzy feeling and female choirs,resulting a melodic ANGE-like introduction to the band’s sound. See for more.