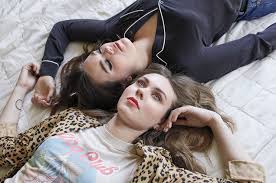 First Aid Kit is a Swedish folk duo. Klara Söderberg sings and plays guitar. Her older sister Johanna Söderberg sings backing vocals and plays keyboards. Their 2008 YouTube video cover of the song “Tiger Mountain Peasant Song” by Fleet Foxes spread their name rapidly on the Internet. After that they have achieved world wide fame with their harmonious singing and country and folk influenced songs, leading to a nomination for a Brit Awards as one of the five best international groups in 2015. In 2015 they were accompanied on tours by drummer Scott Simpson and pedal steel guitarist Melvin ‘The Tiger’ Duffy. See for more.

Winter Is All Over You

King Of The World

I Met Up With The King

Our Own Pretty Ways

Back to the FrontPage.