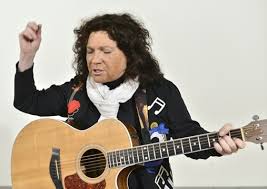 Rita Chiarelli is a Canadian blues singer. She has been dubbed “the goddess of Canadian blues” by CBC Radio One’s Shelagh Rogers. Born and raised in Hamilton, Ontario, Chiarelli began performing in Ronnie Hawkins’ band in the early 1980s. She subsequently spent several years in Italy. When she returned to Canada, she quickly attracted the attention of film director Bruce McDonald, who included her “Have You Seen My Shoes?” on the soundtrack to his 1989 film Roadkill. Chiarelli and Colin Linden subsequently recorded a cover of Bob Dylan’s “Highway 61 Revisited” for McDonald’s 1991 film Highway 61, and Chiarelli released her debut album the following year on Stony Plain Records. See for more.

This is my life

If it Was Love

The Thrill is gone