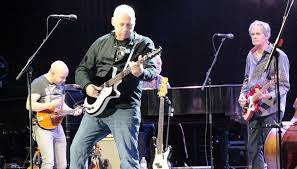 Dire Straits were a British rock band formed in 1977 by Mark Knopfler (lead vocals and lead guitar), his younger brother David Knopfler (rhythm guitar and backing vocals), John Illsley (bass guitar and backing vocals), and Pick Withers (drums and percussion). Dire Straits’ sound drew from a variety of musical influences, including jazz, folk, and blues, and came closest to beat music within the context of rock and roll. Despite the prominence of punk rock during the band’s early years, their stripped-down sound contrasted with punk, demonstrating a more “rootsy” influence that emerged from pub rock. Many of Dire Straits’ compositions were melancholic. Dire Straits’ biggest selling album Brothers in Arms has sold over 30 million copies, and was the first album to sell a million copies on CD. See for more.

Once Upon A Time In The West

The Mans Too Strong