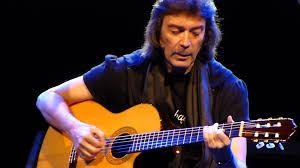 Stephen Richard Hackett (born 12 February 1950) is a British singer-songwriter and guitarist. He gained prominence as a member of the British progressive rock group Genesis, which he joined in 1970 and left in 1977 to pursue a solo career. Hackett contributed to six Genesis studio albums, three live albums and seven singles. In 1986, Hackett co-founded the supergroup GTR with another progressive guitarist, Steve Howe of Yes and Asia. The group released a self-titled album that year, which peaked at #11 on the Billboard 200 in the United States and spawned the Top 20 single “When the Heart Rules the Mind”. See for more.

Blood On The Rooftops

Hammer in the Sand

Shadow of the Hierophant