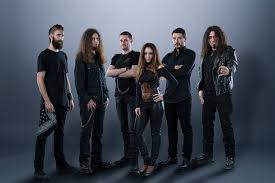 Imperial Age is a symphonic metal band from Moscow, founded in 2012 by singers/composers Alexander “Aor” Osipov and Jane “Corn” Odintsova. They are the second most-internationally touring metal band from Russia and the country’s most known symphonic metal act. Imperial Age has collaborated on multiple occasions with musicians from Therion and Arkona who are featured on all Imperial Age albums. The band was brought to international attention by symphonic metal pioneer Christofer Johnsson,, who, after being impressed with their live performance and their cover of Therion’s song To Mega Therion in 2014, offered to distribute their music through his label Adulruna Records. See for more.

Turn the Sun Off!

The Legacy of Atlantis

Wings Of Your Heart