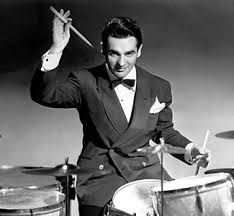 Eugene Bertram “Gene” Krupa (January 15, 1909 – October 16, 1973) was an American jazz and big band drummer, band leader, actor, and composer. Known for his highly energetic, flamboyant style and for his showmanship, Krupa is considered one of the most influential drummers in jazz history and one of the first major percussive soloists. Gene Krupa was born in Chicago, the youngest of Anna (née Oslowski) and Bartłomiej Krupa’s nine children. Bartłomiej was an immigrant from Poland. Anna was born in Shamokin, Pennsylvania, also of Polish descent. His parents were very religious Roman Catholics and had groomed Gene for the priesthood. See for more.

Stompin At The Savoy