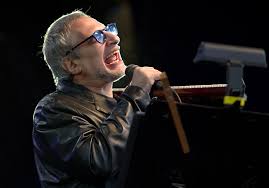 Donald Jay Fagen (born January 10, 1948 is an American musician and songwriter, best known as the co-founder (along with Walter Becker) and lead singer of the rock band Steely Dan. Following the initial breakup of Steely Dan in 1981, Fagen launched a long-running, if sporadic, solo career in 1982, spawning four albums to date. In 1993, Fagen and Becker reunited and have since toured and released albums as Steely Dan.See for more.

Walk Between the Raindrops

The Great Pagoda of Funn