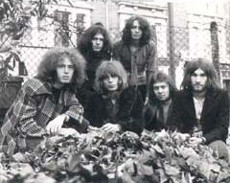 Among the wave of brass rock groups that embraced the rock world from 68 until 71 or 72, Warm Dust was a late-comer, but quickly became one of the most interesting and progressive group of the genre. The sextet developed a solid psych-laced progressive brass rock, lead by the twin sax players of Alan Solomon (also KB) and John Surguy (also guitar) and featuring future Mike Rutherford and Steve Hackett acolyte Paul Carrack. They released their debut album And It Came To Pass on the small Trend label and the double vinyl was a small tour-de-force (all things considered for a debut effort) with long compositions, thought-provoking lyrics and plenty of instrumental interplay, including sax, flute, organ, guitars etc.. See for more.

Blood Of My Fathers

Song for a Star