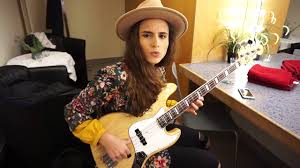 Kinga Głyk is 20 years old. She’s said to be the best Polish bass player of the new generation and a rising star of the Jazz Blues music. She began her adventure with music at the age of 12 playing in a family band called Głyk P.I.K. TRIO. Despite her young age she has already given a lot of concerts not only in Poland but also in countries such as Indonesia, Austria, Germany, Switzerland, Italy, Portugal, Slovakia, the Czech Republic and Ukraine. In March 2015 she released her debut album „Rejestracja”. The CD has received positive reviews from Trójka – Polskie Radio and magazines like „Jazz Forum” and „Twój Blues”. See for more.