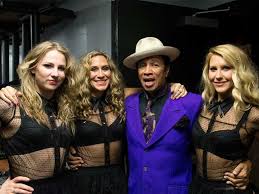 Kid Creole and the Coconuts is an American musical group created and led by August Darnell. Its music incorporates a variety of styles and influences, in particular “American and Latin American, South American, Caribbean, Trinidadian, Calloway” and conceptually inspired by the big band era. The Coconuts are a glamorous trio of female backing vocalists whose lineup has changed throughout the years. Thomas August Darnell Browder was born in The Bronx, New York City, USA on August 12, 1950, his mother was from South Carolina and his father from Savannah, Georgia. As an adult, Thom Browder began going by his two middle names as August Darnell. See for more.

Annie I’m Not Your Daddy