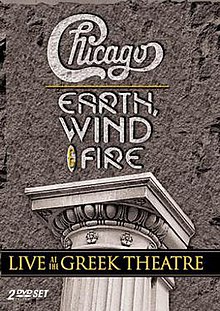 DVD by American bands Chicago and Earth, Wind & Fire. The recording was made from two appearances at the Greek Theatre in Los Angeles, California at the end of their joint tour in 2004. The DVD was certified platinum just two months after its 2005 release. Billboard writer Christopher Walsh gives the following details about the video production: The video was shot in high-resolution audio and high-definition video. Design FX Remote Recording handled audio for the show, which required 110 inputs. Vista, California-based remote recording studio, Le Mobile also provided a truck. According to engineer Mike Frondelli, audio was recorded on Pro Tools HD at 24 bit/48kHz and HD video was captured on ten cameras at 1080i. See for more.

Sing a song / does anybody really knows what time it is?

“After The Love Has Gone”

If You Leave me Now