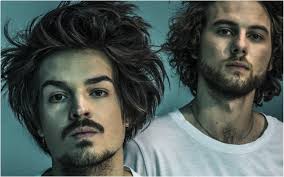 Milky Chance is a German folk group originating from Kassel. It consists of lead vocalist and guitarist Clemens Rehbein, bassist and percussionist Philipp Dausch and guitarist Antonio Greger. Their first single “Stolen Dance” was released in April 2013, peaking at No. 1 on charts in multiple countries including Austria, Belgium (Wallonia), Czech Republic, France, Hungary, Poland, and Switzerland. It also won the 1Live Krone radio awards for Best Single. Their debut album Sadnecessary was released in October 2013, with singles such as “Down by the River”. The album peaked at number 14 in Germany, and in 2014 Spin named Sadnecessary their Album of the Week. See for more.

Down by the River